You are here: Home / City Information / About Warson Woods

A Brief History of Warson Woods 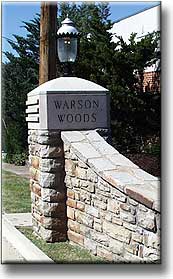 On July 15, 1936, a number of residents in the 1400 and 1500 block of Andrew Drive and Inter Drive (now known as Warson Woods Drive) incorporated into the Town of Royal Oak. The original Trustees were appointed by the St. Louis County Court and their first business act was to select the site of the first City Hall in a building at the corner of Dearborn and Manchester Road. These same Trustees were then elected at the first election held on April 5, 1938.

Mail for the original residents on Andrew Drive was addressed to Rural Route #4, Webster Groves, Missouri, and was delivered to mail boxes at the south end of Andrew on what is now Manchester Road. Until March, 1937, the closest telephone service for Andrew Drive residents was at Boss’s Garage, now the site of Dierberg’s Market.

In April and May 1939, the northward expansion of Andrew Drive and Forest View was finished and a portion of Timberlane was developed. In 1941, a delay was placed on the issuance of new building permits; however, additional gas furnace permits were being issued, reportedly due to labor problems. Joseph H. White and Hanna M. White built most of the homes in this area.

Also in 1941, because of confusion with Royal Oaks, Michigan, the Board of Trustees voted to change the name of their town to the Village of Warson Woods. This was done by resolution on November 10, 1941. 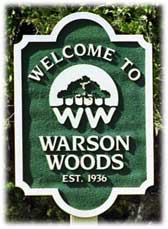 In the early 1940’s, the Warson Woods pioneers rode the “jitney” to Rock Hill for five cents to shop at Hoch’s Grocery, Country Hill Grocery or Mrs. Grosheim’s Hardware Store. A beauty shop, blacksmith shop and drug store were also in Rock Hill. Maplewood could also be reached on the same jitney for ten cents and with fifteen cents a trip to downtown St. Louis was available.

As time passed, a grocery store, Vogelgesang’s Service Station and Hardesty Grocery entered the Village. To the west in Kirkwood at Manchester and Woodlawn, Linder’s Market opened.

The Bennett Hills section of Warson Woods was built in the early 1950’s and Warson Woods Drive was extended from Andrew Drive to join Renderer Drive. This property was part of the McMannus Estate, which had a race track for horses, lakes and a forest.

There was a spring-fed lake surrounded by blackberry bushes and other wild shrubs. In the middle of the lake there was a small island covered with violets (in season). In this area now, the city has Royal Oaks Park with playground equipment, two tennis courts, a basketball court, pavilion and swimming pool. This area was purchased from Joseph H. White and Wymetta Drive was vacated. Title was conveyed so that it will forever be a park.

In 1948, Joseph H. White began building the Warson Village Shopping Center, with the second section commencing in 1952. This was the first strip shopping center built in St. Louis County and was quite a novelty in those days. When the shopping center was completed, Dearborn Drive was closed off from Manchester Road and a new street called Warson Woods Boulevard came off Manchester to join with Ridgeline Drive for access to Dearborn Drive and Forest View.

The census figures showed that the Village was growing and something was needed to enable the Village to continue to exist. An election was held on August 7, 1957, asking the citizens to approve the Village becoming a 4th class city. The voters approved the proposal, allowing more taxes to be generated and the residents to have more control over their government.

All commercial building had ceased until 1994 when Dierberg’s Markets and Capitol Land, in a joint venture, purchased Warson Village Shopping Center and approached the Board of Aldermen with plans for the new Warson Woods Shopping Center. Their plans included demolishing the buildings between the city limits and Warson Woods Boulevard and building a new strip of stores. Demolition began by removing the center section of the shopping center. With this building gone, construction began on the new strip center. Most of the existing merchants moved to vacancies in the buildings west of Warson Woods Boulevard or into the new strip of buildings which opened in the spring of 1995.

As all merchants were now relocated into their permanent spaces, demolition began on the buildings on the eastern border of Warson Woods and construction of the new Dierberg’s Market began, with its completion in January of 1996.

Below is a picture of what the Warson Woods Plaza used to look like. I’m sure more than a few of you can remember this era… 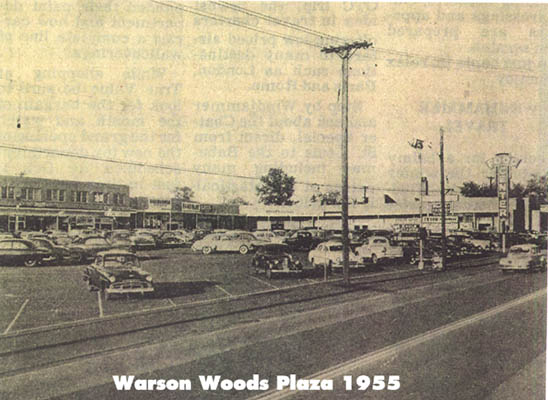